Huey Remixed 1967: the Poster of Huey P. Newton in a Rattan Chair

Between 2nd half of May 1967 and beginning of July, 1967, a poster of the photograph of Huey P. Newton in a rattan chair was printed.

The date of origin of the posters as not been supported with sources. However we know that the posters has been made after the first publication of the image on May 15th, 1967 and the pictures of ‘Huey in front of the poster’ made by Ted Streshinsky in July 1967.

According to the website of National Museum of African American History and Culture Collection, this poster first appeared in 1968 (which is incorrect: it is May/June 1967). The poster is a lithographic ink on paper (fiber product), linen (material) with the dimensions (w/ mat border): 34 3/4 × 23 1/2 in. (88.3 × 59.7 cm). It is made in Emeryville, Alameda County, California, United States in 1968. The NMAAHC-site states that it is created by the Black Panther Party, but in the guided tour the the exhibition All Power to the People, Kathleen Cleaver stated that it was Eldridge Cleaver, Minister of Information of the BPP himself that took the picture. This statement is supported by a caption found at the Soul of a Nation Exhibition in London, visited on October 18th: “This image of Huey P. Newton […] appeared in the first official issue of the Black Panther – Black Community News Service. Fellow Panther Eldridge Cleaver selected props such as the zebra skin rug and Zulu shields to evoke the fearless leadership of a warrior king. Newton was even seated in a throne-like rattan ‘peacock’ chair, spear in one hand, shotgun in the other.The image of an African American mand armed defensively was a powerful statement of intent in marked contrast to the nonviolent campaigns for integration.” (Soul of a Nation, 2017)

The poster presents Dr. Huey Percy Newton (February 17, 1942 – August 22, 1989), cofounder and Minister of Defence of  the Black Panther Party for Self-Defence “sitting in a rattan throne chair wearing a beret and a black leather jacket while holding a rifle in his right hand and a spear in his left hand. Leaning against the wall on either side of the chair is a leaf-shaped, Zulu style shield with designs of horizontal line markings across the front. Beneath the chair is a zebra print rug.” (nmaahc.si.edu)

Along the bottom-left of the poster is the text: “”The racist dog policemen must withdraw immediately from our communities, cease their wanton murder and brutality and torture of black people, or face the wrath of the armed people.” Huey P. Newton, Minister of Defence”

On November 28th 2018, during the guided tour as part of the symposium and exhibition “All Power to the People! Emory Douglas & The Black Panthers” Kathleen Cleaver said about the image of Huey P. Newton: “This is a Black Panther, so there’s a lot of African symbolism […] it looks like a warrior”. Emory Douglas: “An urban warrior!” Cleaver: ” A BLACK URBAN WARRIOR! A Black Panther”. This was early, the Black anther Party was very small when this picture was taken” […] “Huey in this picture, what is he, twenty-two?” Douglas: “I was twenty-two and Huey was twenty-three…”

By this account, that means that the picture was taken in 1965 (since Huey was claimed to be 23 and is born in 1942). However, Eldridge Cleaver, according to Wikipedia, was released from prison on December 12, 1966. So it must have been taken between in ’67 and late 1968, when Cleaver fled to Cuba.

On p. 62 of the Soul of a Nation: “[Emory] Douglas had joined the Black Panthers in 1967. […] [Eldridge] Cleaver [Minister of Information, editor of The Black Panther Newspaper] was already defining a powerful visual identity for the Party, for instance setting up the famous photograph of Newton in a wicker chair holding a shotgun and African spear[…]” (Soul of a Nation, 2017, p.62)

Soul of a Nation: Art in the Age of Black Power, exhibition, Tate Modern, Londen UK, visited on October 18th, 2017

Soul of a Nation: Art in the Age of Black Power, catalogue/publication, Tate Publishing, London, 2017.

All Power to the People! Emory Douglas & The Black Panthers, West Den Haag, guided tour through the exhibition by Emory Douglas and Kathleen Cleaver, November 28th, 2018. 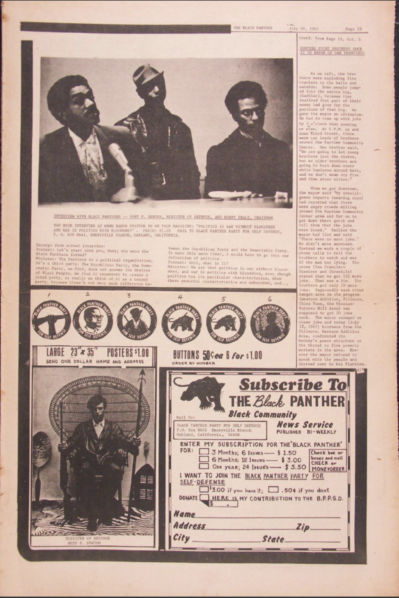 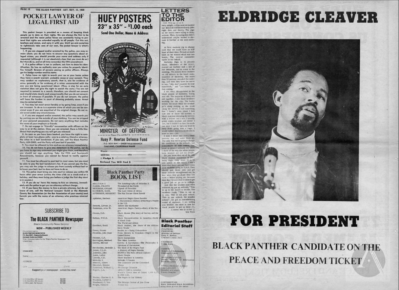 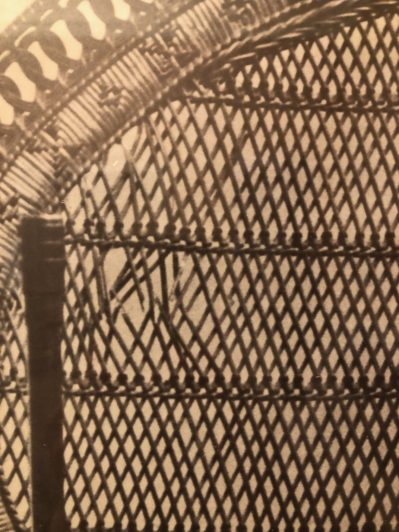 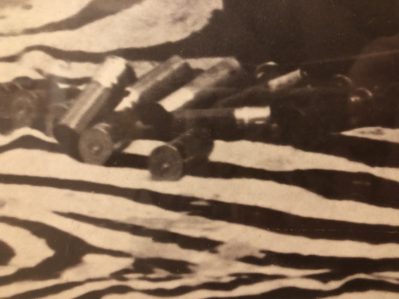 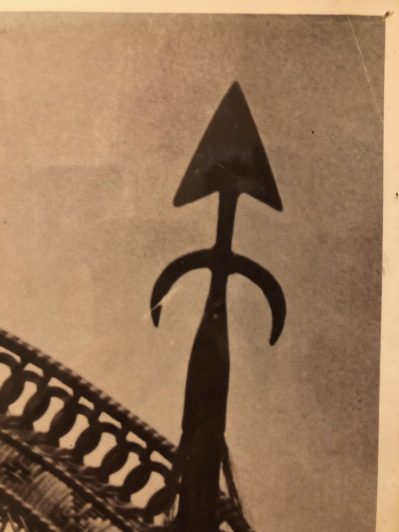