“The cultural understanding of ‘Little Black Sambo’ is a negative,” says Professor Frank Gilliam of UCLA. “It’s meant to suggest that people of African descent are childlike, that they’re irresponsible, that they’re not fully developed human beings.”  — from Mulatto Diaries

The Story of Little Black Sambo, a children’s book by Helen Bannerman, a Scot living in India, was first published in 1899. The book appeared in England in 1899 and was an immediate success. The next year it was published in the United States by Frederick A. Stokes, a mainstream publisher. It was even more successful than it had been in England. […] At the time that the book was originally published Sambo was an established anti-Black epithet, a generic degrading reference. It symbolized the lazy, grinning, docile, childlike, good-for-little servant. 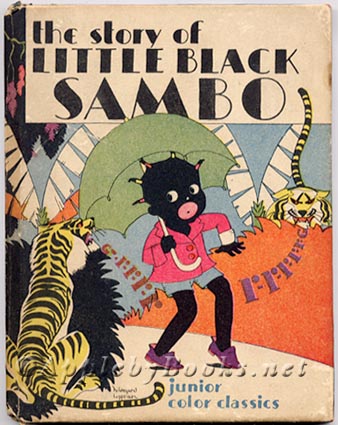