In 2010, in an attempt to brand Dutch department store HEMA internationally, renounced advertisement agency Kessels Kramer started a pop-up store in Londen, called KK Outlet.  Under the name “Sinterklaas pops up in London” people can get acquainted with Sinterklaas. This Dutch Saint will even have his own parade on December 2, 2010. He will ride on his horse through the streets of London, with his helper Pete and will give out presents. His full- face black make-up is replaced by two black dots; one on each cheek. 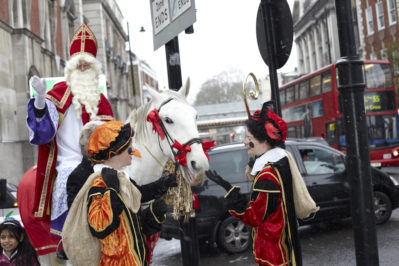