Prelude: “It’s that time of the year again…”

One of the books that had the most influence on me was ‘Representation. Cultural representations and signifying practices’ edited by Stuart Hall. I read this book —and specifically Chapter 4: The Spectacle of the ‘Other’ as research for my BA thesis on racial stereotypes in 2002. Though at the time I did not grasp the full complexity of what Hall was saying, the way the visual examples were deconstructed influenced my life, professional and teaching practice forever. I continue to return to this book for my own research, with my graphic design students and when I encounter racism in pop.culture and every day life.

This book was also the first book that made me aware of the relation between the folkloric figure of Zwarte Piet (Black Pete) and racist history. The image of Zwarte Piet is part this history in which black people, via images that are presented in white-ruled entertainment, media and politics, are reduced to simplified characteristics that are used to see this human group as lesser people. The characteristics include (amongst others): young (thus: childish, non-mature, non-sexual), dumb (thus: submissive, obedient), lazy (thus: criminal), Nature (thus: not civilised, not-christian and therefore: a beast, without moral values, sexual), strong (thus: good for physical labour, dangerous, violent).

All of these racist characteristics are applied to the character of Black Pete as the counterpart of St. Nicolas. Piet is genderless (vs St. Nicolas who is always a man), Piet is childish (vs Nicolas as the old man), Piet is strong, Piet is dumb (vs the wise man), Pete is the helper (submissive to the white ruler), Pete is nice (and harmless) and the one who is malevolent; the executioner of St. Nicolas’ judgement. Piet is the anti-saint, anti-christian figure (e.g. satan). 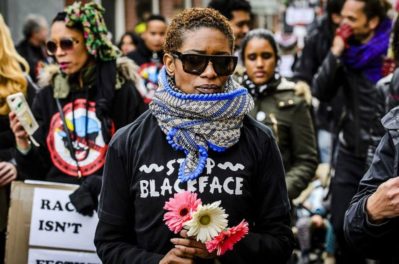