The uncanny resemblance between the ‘pakjesboot’ and ‘Brookes’ slave ship

Perhaps the illustration of the ‘pakjesboot’ is not intended as a reference to the Brookes diagram, but the association with this symbol of the brutality of slavery leaves an indelible print on the retina of the eye of the beholder. Especially the eye of those who know the image and have this in their cultural archive.

The folktale tells us that Saint Nicolas arrives by steamboat in The Netherland. St Nicolas is the patron saint of -amongst others- sailors. This steamboat is, according to Ineke Strouken, Director of the Dutch centre for Folkculture, introduced by Jan Schenkman around 1850. Strouken: “He [Jan Schenkman] was a progressive man and wanted to give St. Nicolas something special; the steamboat was brand new.” (De Volkskrant Nov 19, 2011, p32/33, translation by author). Schenkman also introduced Black Pete as the servant of St. Nicolas.

In 2007, the children’s picture book ‘Sinterklaas’ by illustrator Charlotte Dematons was published. A book full of very rich and detailed illustrations. That same year it won the size of ‘Most Beautiful Bookcover’ and in 2008 was awarded with the ‘Gouden Penseel’ (Golden Brush) a Dutch literature prize for best illustrated book. It became a bestseller which sold 150.000 copies. (rtlz.nl)

This book features an illustration of a cross section of the ‘pakjesboot’ (Nicolas’ steamboat full with presents and candy). This illustration has an uncanny resemblance with the well-known image of the Brookes slave ship.

‘This diagram of the ‘Brookes’ slave ship is probably the most widely copied and powerful image used by the abolitionist campaigners. It depicts the ship loaded to its full capacity – 454 people crammed into the hold.The ‘Brookes’ sailed the passage from Liverpool via the Gold Coast in Africa to Jamaica in the West Indies.” (www.bl.uk) “it was bigger than most slave ships and made ten voyages to the west coast of Africa, carrying more than 600 Africans on three occasions and 740 in 1785–1786. In 1788, the abolitionist William Elford created an influential, even iconic broadside depicting the design of the Brooks and how enslaved Africans were stowed in his hold.” (www.encyclopediavirginia.org)

“In 1788, abolitionists in Britain commissioned a drawing of how people were squeezed on board the ‘Brooks’ to raise awareness of the inhumanity of the slave trade. The image was so effective that it was soon reproduced and distributed widely around the country and abroad. The crisp drawing of the ship’s architecture contrasts with the figures of enslaved Africans crammed below decks, without room to sit let alone to stand. Even today, the image of the Brooks is one of the most powerful and recognisable images associated with the slave trade and its abolition.” (collections.rmg.co.uk)

The fact that it is “one of the most powerful and recognisable images associated with the slave trade and its abolition” is proven by the use of the diagram in the albumcover of Bob Marley & The Wailers‘ ‘Survival (1979)’, designed by Neville Garrick. He uses a cropped version of it as a symbol for the Black diaspora. In an interview with Eye Magazine, Garrick says: “Survival is probably my favourite album. […] The idea of flags came up, so I got information about all the flags of free Black Africa and then I painted them, […] But the Blacks in America, the Blacks in England, the UK all over, they don’t have a flag. And then I got a mind-flash. Anybody who’s in te diaspora from Africa came out through slavery. So that’s how the slave ship came.” (Eye 21/01, page 2, online here)

This illustration was also used as a promotional tool in window shops. It was displayed in 2009 and 2010 prominently in the window of bookshop Donner at the Binnenwegplein in Rotterdam.

In 2017 news came out that the popular book by Dematons will not be reprinted. The 60 year-old Dutch illustrator did not want to be confronted with negative reaction of the public and did not want to be accused of discrimination and racism. (www.volkskrant.nl).

I do not know if Dematons is familiar with the Brookes slave ship. Contrary to the US and UK, in The Netherlands this symbol is not by default part of the cultural archive. Dematons or Donner were maybe not aware of the effect of this image on people who have this image in their archive. Perhaps the illustration is not intended as a reference to the Brookes diagram, but the association with this symbol of the brutality of slavery leaves an indelible print on the retina of the eye of the beholder. 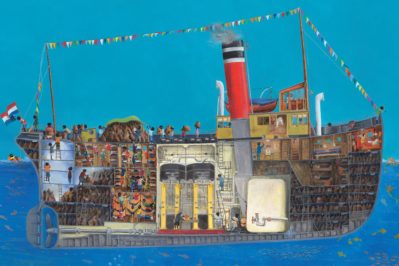 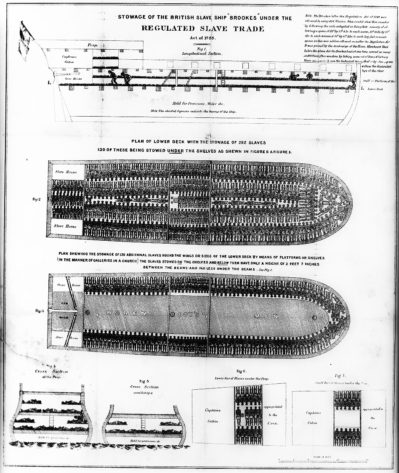 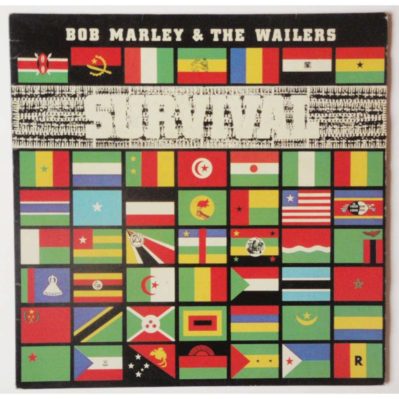 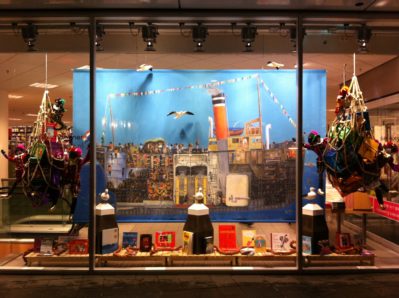 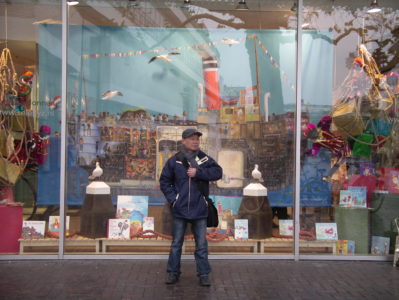