Nana Adusei-Poku: “We shall call discourse a group of statements in so far as they belong to the same discursive formation […Discourse] is made up of a limited number of statements for which a group of conditions of existence can be defined. Discourse in this sense is not an ideal, timeless form […] it is, from beginning to end, historical – a fragment of history […] posing its own limits, its divisions, its transformations, the specific modes of its temporality.” (Foucault 1972, 117) from lecture “Visual culture, Identity and Design” by Nana Adusei-Poku on March 19, 2015 @ WdKA, Rotterdam (NL)

Michel Foucault (1926-1984): “A selection from a large variety of sources, references and theories (cultural, historical, scientific) that will lead to a meaning.”

Stuart Hall (1932-2014): “A discursive position: differences exist in the world. But what matter are the systems of thought and language we use to make sense of those differences”

Eduardo Navas: “Discourse is commonly understood in the humanities as an ever-changing set of ideas up for debate in written and oral form. However, I also consider discourse to include all forms of communication, not just writing and oral communication. […] My use of discourse is certainly informed by [Michel Foucault’s] definition (debates within and among specialised fields of knowledge), and I do extend Foucault’s definition to media at large, because at the beginning of the twenty-first century it is media as a whole that’s treated as a form of writing; or rather, media is discourse.” (Navas 2012, 3) 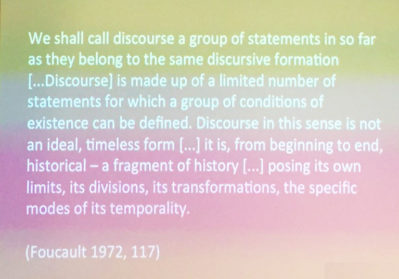 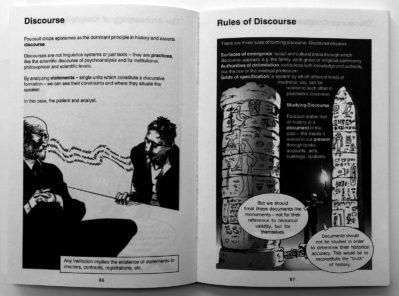 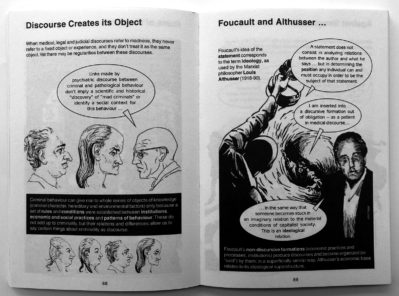