The Context: The sampled history of the Black Panther Party – 1969

“During the year 1969, Party offices all across the country were attacked [by police and FBI].” (Shames, 2016) “In 1969, in cities where there were strong party chapters, Liberation Schools staffed by volunteer party members opened in storefronts, churches and homes. These after-school programs were created to give academic support to black and other poor youth.” (Shames 2016, 93)

“The Black Panther community programs began in early 1969 under Bobby Seale’s leadership, marking an important transformation in the Party’s political practice. In the fall of 1968, Eldridge Cleaver went into exile to avoid returning to prison when his parole was revoked. With Huey Newton in prison, Seale, a staunch advocate of community programs since his days working in the government poverty program in Oakland, became primarily responsible for setting Party policy.” (Bloom 2016, 181)

“In early 1969, [Conny] Matthews [young Jamaican woman employed by the United Nations Educational, Scientific, and Cultural Organization in Copenhagen, Denmark] organized a tour for Bobby Seale and Masai Hewitt throughout Scandinavia to raise money and support for the “Free Huey!” campaign. […] Seale and Hewitt’s Scandinavia trip brought funding, the prestige of formal endorsements from European organizations, and a network of support for the “Free Huey!” campaign.” (Bloom 2016, 313)

01.04.1969 — “[…] [T]he Central Committee expanded the Rules of the Black Panther Party and published the new set of twenty-six rules in the Black Panther on January 4, 1969. Most of the new rules emphasized organizational accountability, especially programmatic, ideological, and financial accountability to the Central Committee[.]” (Bloom 2016, 343)

01.12.1969 — “On January 12 [1969], Bobby Seale told the press, “We now have 45 [chapters]…We aren’t taking in any new members for the next three to six months… We are turning inward to tighten security, [to] get rid of agents and provocateurs and to promote political education among those who have joined the Panthers but still don’t understand what we’re all about.”” (Bloom 2016, 344)

“The Party launched its first free breakfast program at Father Earl A. Neil’s St. Augustine’s Episcopal Church in west Oakland in late January 1969.” […] “The first day the program opened it served 11 children. By the end of the week, the program was serving 135 children daily at St. Augustine’s.” (Bloom 2016,182)

02.1969 — “Heeding the call to defense, in early 1969, the Students for a Democratic Society committed to work with the Panthers to organize a February 16 – 17 birthday celebration for Huey Newton in twenty cities nationwide to mobilize support for the “Free Huey!” campaign.” (Bloom 2016, 298)

03.20.1969 — “Despite his minimal involvement in the protests at the Democratic National Convention in Chicago, a federal grand jury indicted [Bobby Seale] on March 20, 1969, for conspiracy to incite riots along with the other “Chicago Eight”” (Bloom 2016, 251)

04.1969 — “By April, the Party reported feeding more than twelve hundred children per day at nine facilities in Oakland, San Francisco, and Vallejo in California; in Chicago; and in Des Moines, Iowa.” (Bloom 2016, 182)

04.02.1969 — “On April 2, in a sweep across the New York region, twenty-one Panthers […] were arrested and charged with dozens of conspiracy charges, alleging that the twenty-one were “plotting terrorists acts” and planning to blow up Bloomingdale’s, bomb a local police station, and even target the Bronx Botanical Gardens. (Vincent, 2013, p.227). […] The New York 21 trail would be the longest trial in the state’s history.” (They were acquitted on May 13, 1971.)

04.09.1969 — “On April 9 [1969], […], as Bobby Seale and the rest of the Chicago Eight were arraigned in Chicago on conspiracy charges for their part in the rebellion at the Democratic Convention, the Black Panthers joined with the Students for a Democratic Society to organize a rally in downtown Chicago. Speaking to the more than five hundred people gathered at the rally, the Panthers proclaimed their position as the “vanguard of the revolutionary struggle today.” Seale and Hampton jointly spoke of plans for a massive organizing drive in Chicago that summer in preparation for Seale’s trial in September.” (Bloom 2016, 231)

05.01.1969 — “[Next to “Free Huey!” demonstrations in Oslo, and Helsinki], In Copenhagen, the Left Wing Socialist Party was particularly active, organizing an independent march of more than six hundred people that broke off from the main May Day [Mai 1, 1969] protest and rallied at the U.S. embassy to call for Huey Newton’s release from prison.” (Bloom 2016, 313).

05.20.1969 — “On the evening of May 20, [w]ith [35 year old Panther Warren] Kimbro and [young new Panther recruit Lonnie] McLucas, [New York Panther George] Sams took [nineteen years old Alex] Rackley to a wooded swamp in the suburbs. Sams handed Kimbro his .45 and said “Ice him. Orders from National.” Kimbro shot Rackley in the back of the head, killing him. Sams then took the gun back and handed it to McLucas, telling him to finish Rackley off. McLucas shot Rackley in the chest.” (Bloom 2016, 249).

05.22.1969 — On May 22, a day after police found the body of murdered Alex Rackley in New Haven, 12 Panther were indicted, including Bobby Seale and Ericka Huggins. While McLucas, Kimbro and Sams testified that they participated in the crime, Sams claimed that he gave the orders to the other Panthers at the request of Bobby Seale.

07.18.1969 — “Nondogmatic throughout its history, the Black Panther Party worked with a range of leftist organizations with very different political ideologies — a highlight being its hosting of the United Front Against Fascism Conference in July 1969.” (Bloom 2016, 312) “The Black Panther Party held the United Front Against Fascism Conference in Oakland from July 18 to 21 [1969]. […] at “Bobby Hutton Park” (officially DeFremery Park); others […]in the Oakland Auditorium.” (Bloom 2016, 300)

08.19.1969 — “On August 19, on the basis of [George] Sams’s testimony, Bobby Seale, […] was arrested in Berkeley, California, on capital charges of conspiracy to commit murder for allegedly ordering the killing of Alex Rackley.” (Bloom 2016, 250) “Seale went to prison that August [1969], and David Hilliard, chief of staff of the Party, took the reins of the national Party organization. Hilliard continued to give priority to development of the Free Breakfast for Children Program, and during his tenure, the program spread like wildfire, becoming the most important Panther activity.” (Bloom 2016, 182)

“In the fall of 1969, the New York Times reported that while in Algeria, Eldridge Cleaver had begun discussions with the Vietnamese delegation to the festival about an exchange of prisoners of war for the release of Bobby Seale and Huey Newton from prison.” (Bloom 2016, 318)

10.29.1969 — “On October 29, the judge — unwilling to let Seale defend himself and unable to silence him — ordered Seale shackled to a chair and gagged. Seale continued to bang his chair and shout through his gag, demanding the right to defend himself.” (Bloom 2016, 252)

11.05.1969 — “On November 5, the judge sentenced [Bobby Seale] to four years in prison on sixteen counts of criminal contempt of court and severed his case from that of the remaining seven defendants.” (Bloom 2016, 252) 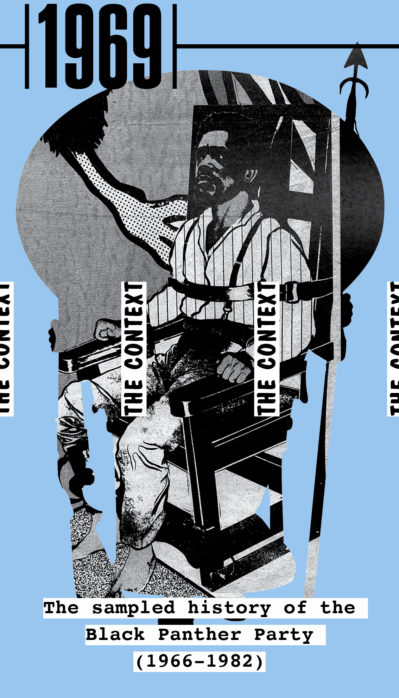