The Context: The sampled history of the Black Panther Party – 1971

01.1971 — “Meanwhile, from their refuge in Algeria, members of the International Section of the Party promoted immediate guerilla warfare against the U.S. government. Eldridge Cleaver and Field Marshal Donald Cox regularly exhorted young blacks to violence in the pages of the Black Panther. In January 1971, Cox argued, “When a guerilla unit moves against this oppressive system by executing a pig or by attacking its institutions, by any means — sniping, stabbing, bombing, etc. — in defense against the 400 years of racist brutality, murder, and exploitation, this can only be defined correctly as self-defense.” (Bloom 2016, 358)

02.13.1971 — “The cover of the February 13, 1971, issue of the Black Panther, reproduced the mimeographed statement distributed outside the New York courtroom that expelled most of the New York Panthers from the Party. […] The disappearance of Tabor and Dhoruba had forced the Party to reveal the split.” (Bloom 2016, 362)

02.26.1971 — “On February 26, on the Jim Dunbar “A.M. Show” aired live on San Francisco’s ABC-TV affiliate, tensions in the Party exploded. From the studio, Huey Newton spoke with Eldridge Cleaver in Algiers via telephone. Cleaver demanded that Newton reinstate the New York 21 and that Newton expel Hilliard from the Party. Newton refused to continue the discussion.” (Bloom 2016, 362)

02.26.1071 — “On February 26, 1971, Panther Party leaders Huey Newton and Eldridge Cleaver (still in exile in Algeria) agreed to speak by phone on a local television program broadcast, ostensibly as a show of Party unity. […] Newton and Cleaver expelled each other from the Party. That fatefull phone call was the public acknowledgement of the growing rift between Newton’s notion of a socialist-leaning, politically engaged Panther Party and Cleaver’s notion of a guerilla warfare oriented party.” (Vincent, 2013, 252).

02.28.1971 — “Two days after the televised flare-up, [February 28, 1971] Eldridge Cleaver and Donald Cox released videotapes to the U.S. press accusing Hilliard of turning the Panther organization into atop-heavy and undemocratic bureaucracy that served his personal purposes and of purging those he did not favor.” (Bloom 2016, 363)

03.06.1971 — “The cover of the March 6, 1971, issue of the Black Panther featured an image of Kathleen Cleaver wearing shades and the headline “Free Kathleen Cleaver and All Political Prisoners.” Inside the issue, an article by Elaine Brown alleged that Eldridge Cleaver was beating Kathleen, preventing her from leaving Algiers, and not allowing her to talk with her fellow members of the Central Committee.” (Bloom 2016, 363)

03.08.1971 — “[…] [O]n Monday March 8, Black Panther Robert Webb was shot in the head and killed […] in New York [Harlem]. In a press conference the following day, Zayd Shakur of the Cleaver-aligned New York Panthers asserted that […] Webb was killed when he attempted to seize copies of the Black Panther that described Kathleen Cleaver as a political prisoner from two Newton allies who were distributing the newspaper on the street.” (Bloom 2016, 363)

04.03.1971 — “On April 3, 1971, [the Cleaverite faction] began publishing its own newspaper, Right On!, advocating full and immediate insurrection. The paper was published with support from the Weathermen via an aboveground ally — the Independent Caucus of SDS at the State University of New York. The paper featured articles by Eldridge Cleaver and the New York 21.” (Bloom 2016, 369)

05.1971 — In May 1971 ‘Soledad Brother’ George Jackson created the San Quentin Chapter of the Black Panther Party with a vision to organize the entire United States black prison population. Jackson was killed on August 1st of that same year in a prison riot.

05.21.1971 — “On May 21 [1971], two New York police officers were ambushed and killed in Harlem. People claiming to be members of the Black Panther – affiliated Black Liberation Army notified the press, taking responsibility for the murders.” (Bloom 2016, 373)

06.1971 — “In early June, Dhoruba Bin Wahad and Eddie Jamal Joseph — previously acquitted of all charges in the high-profile New York 21 case —were again arrested and charged with holding up a Bronx social club.” (Bloom 2016, 373)

06.1971 — “In June [1971], the State of California began a retrial of Huey Newton on charges of manslaughter in the 1968 killing of Officer John Frey. That month, the trial of David Hilliard also began for charges stemming from the shoot-out in which Bobby Hutton was killed.” (Bloom 2016, 372)

07.1971 — “In late July [1971], a New York grand jury indicted seven New York Panthers —including Moore and Josephs — in the brutal murder of the national distribution captain of the Black Panther, Samuel Napier.” (Bloom 2016, 373)

09.09.1971 — “[O]n September 9 [1971], inmates took over Attica prison in New York. They called in the Panthers to help negotiate their demands but achieved no resolution. On September 13, Governor Rockefeller responded with force, […] to take back the prison. The troops killed twenty-eight prisoners, while nine hostages died in the battle.” (Bloom 2016, 378) 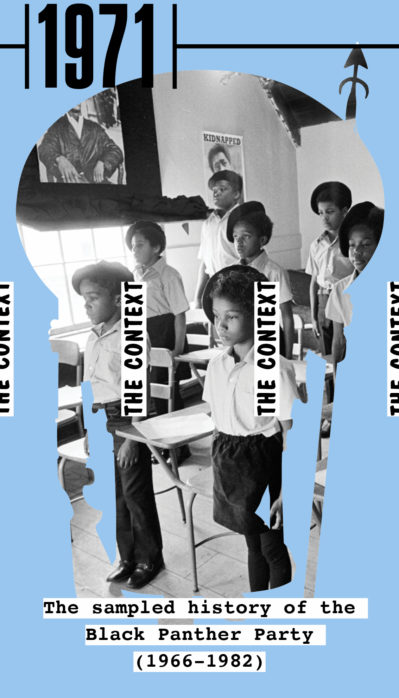