A Short history of the Black Panther Party & Huey Newton

The Black Panther Party for Self Defense (1967–1982) was a revolutionary political organization that sought liberation through anti-racist and anti-capitalist strategies. The Party combined armed resistance against police brutality and state oppression in the black communities, with community service programs (e.g. breakfast for children, free medical service and a school). The Black Panther Party became known to the world through its spectacular image and their performative actions through rallies and media appearances.

Huey Percy Newton (1942-1989) was the co-founder and Minister of Defense of the Black Panther Party. He was seen as the visionary and intellectual leader of the party.

October 22, 1966 — The Black Panther Party for Self Defense was founded by Bobby Seale and Huey P. Newton in Oakland, California. The Ten Point Platform and Program is their founding document.

May 2, 1967 — Bobby Seale leads a group of thirty heavily armed Panthers who march into the Californian State Capitol in Sacramento to protest the Mulford Act, a bill that will restrict the right to bear arms in public. “The Black Panther Party burst upon America’s consciousness when media from all over the world covered this protest” (Shames, 2016) In May, after Sacramento, Eldridge Cleaver joined the party and became the Minister of Information.

May 15, 1967 — The image of Huey Newton in a rattan chair composed by Eldridge Cleaver was published in the 2nd edition of the The Black Panther: Black Community News Service, next to the Ten Point program.

October 28, 1967 — Newton is involved in a shootout with Oakland police after a traffic stop. Officer John Frey is killed, Newton is shot in the abdomen. Newton is arrested and charged with first-degree murder. From this moment until his release on August 5, 1970, Huey was incarcerated in the Alameda County jail in Oakland, California.

November 1967 — Kathleen Neal (later Cleaver) moved to San Francisco to join the Black Panther Party and became one of the first recruits to join the ‘Free Huey!’ campaign. Together with Eldridge Cleaver, she set up the campaign and would go on to become a key player in the Panther leadership.

The Free Huey! campaign galvanized the Black Panther Party and increased its reception and supporters. “FREE HUEY!” became a black radical rallying cry that swept across a generation of young activists. Besides that, it was a way for white liberals and celebrities to associate themselves with the Panthers. “Huey ain’t on trial, the black people are on trial here.”, Bobby Seale said on July 15, 1968 in front of the Alameda County Court House in Oakland. Essential to the Free Huey! Campaign is that the Party would give priority to the political path over Newton’s personal interest. The Panthers would use Huey’s trial as a forum to put America on trial, to expose its inherent racism and injustice.

By the fall of 1968, the Black Panther Party, became a national organization, with chapters in more than 20 cities. The newspaper had a weekly circulation of more than 100.000 copies.

February 17, 1968 — On Newton’s birthday the first ‘Free Huey!’ Rally was held at the Oakland Auditorium, which presented a merger between SNCC (Stokely Carmichael, H. Rap Brown) and the Black Panther Party.

April 6, 1968 — 17-year-old Lil’ Bobby Hutton, one of the first Panther recruits is killed during a shootout with police in Oakland. He was the first Panther killed in action. Eldridge Cleaver was also wounded.

September 8, 1968 — A jury acquits Newton of murder but convicts him of voluntary manslaughter in the killing of Officer Frey and sentenced to two to fifteen years in prison.

September 10, 1968 — Two white on-duty uniformed police officers shot up the windows and office of the Black Panther National headquarters in Oakland. The target is apparently the poster of Huey in a rattan chair.

December 1968 — Unwilling to go back to prison, Eldridge Cleaver went underground and clandestinely travelled to Cuba, eventually to Algeria.

August 19, 1969  — Seale is arrested in Berkeley on charges of inciting a riot at the Democratic National Convention in Chicago a year earlier. At the famous Chicago Seven trial, Seale is bound and gagged after refusing to stop his courtroom outbursts.

In 1969 the Black Panther Party’s political practice makes an important transformation to community programs. In late January, the Party launched its first free breakfast at Father Earl A. Neil’s St. Augustine’s Episcopal Church in west Oakland, which sparked the rise of the Free Breakfast Program. By November the Party reported feeding children free breakfast daily in twenty-three cities across the country and from coast to coast.

April 2, 1969 — In New York, twenty-one Panthers were arrested and charged with dozens of conspiracy charges, allegedly “plotting terrorists acts”. The New York 21 were acquitted on May 13, 197, making it the longest trial in the state’s history.

June, 1969 — Chicago’s Black Panther deputy chairman, Fred Hampton announced a coalition with the Young Lords and the Young Patriots: “We got blacks, browns, and whites…we’ve got a Rainbow Coalition!”

December 4, 1969 — Members of the Chicago Police Department, in coordination with the FBI, raided the apartment of Fred Hampton. Hampton was executed in the bed where he slept; Mark Clark also died.

June 1970 — The first International Section of the Black Panther Party was set up in El Biar, a suburb in the hills outside Algiers.

August 5, 1970 — Newton was released from prison, after his first conviction for the death of officer Frey is overturned. He moves into a top-floor apartment at 1200 Lakeshore Ave., Oakland.

February 26, 1971 — Newton and Cleaver expelled each other from the Party, during a conversation through the phone that was broadcasted on a local television program broadcast. That fatefull phone showed the growing rift between Newton’s notion of a socialist-leaning, politically engaged Panther Party and Cleaver’s notion of a guerilla warfare oriented party.

May 25, 1971 — Seale’s murder conspiracy case is dismissed in New Haven, Conn., following dismissal of his case in Chicago. He is freed after 21 months in jail.

August 21. 1971 — George Jackson, author of Soledad Brother, founder and leader of the Black Panther chapter at San Quentin Prison, was shot and killed by guards.

Around 1972, The Black Panther Party ceased to be a national organization and once again became a local Oakland organization.

March 29, 1972 — The Black Community Survival Conference is held at Oakland Civic Auditorium. Ten thousand bags of groceries are given away with canned goods on the bottom, packaged goods in the middle and a 4-pound chicken in every bag.

May 20, 1972 — The Black Panther Party announced that it was running Chairman Bobby Seale for mayor of Oakland, and Minister of Information Elaine Brown for a seat on the Oakland City Council. They both lost their political bids in April 1973.

September 1973  — The Oakland Community School opens to educate the children of the Panthers. Capacity of 150 kids is soon reached.

August 1974 — Put on trial for a variety of violent offenses such as assault and multiple murders, Newton and his girlfriend (later his wife) Gwen Fontaine fled to Havana, Cuba, where they lived until 1977.

August 1974 — Elaine Brown become leader of the Black Panther Party, that Under Elaine Brown’s leadership from experiences something of a local renaissance as a social democratic organization. The cornerstone of the Party’s program was the Oakland Community School, an elementary school directed by Ericka Huggins.

1980 — Newton earned a Ph.D. in the Social philosophy program of History of Consciousness from the University of California at Santa Cruz. His dissertation, “War Against the Panthers,” was subtitled “A Study of Repression in America.”

1982 — The Black Panther Party is dissolved and the Oakland Community School closes.

August 22, 1989 — Newton, 47, is shot to death on a West Oakland street by a member of the Black Guerrilla Family, Tyrone Robinson, allegedly over a drug deal. 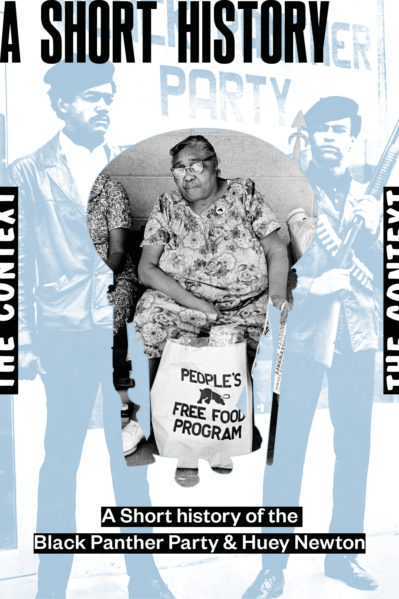