T and O style mappa mundi (map of the known world) from the first printed version of Isidorus’ Etymologiae (Kraus 13). The book was written in 623 and first printed in 1472 at Augsburg by one Günther Zainer (Guntherus Ziner), Isidor’s sketch thus becoming the oldest printed map of the occident. T-O-maps are typically displayed “East-up”, show Jerusalem at the center and the paradise at the outmost East, balanced by the pillars of Hercules at the outmost West.
This T and O map, which abstracts that society’s known world to a cross inscribed within an orb, remakes geography in the service of Christian iconography and identifies the three known continents as populated by descendants of Sem, Cham and Japheth.

This supports the biblical idea that all humans descent from Cham, Sem and Japhet, the three sons of Noach. The explanation that black Africans, as the “sons of Cham”, were cursed, possibly “blackened” by their sins, became increasingly common during the 18c and 19c slave trade and justified slavery, racism and the exploitation of Africans. 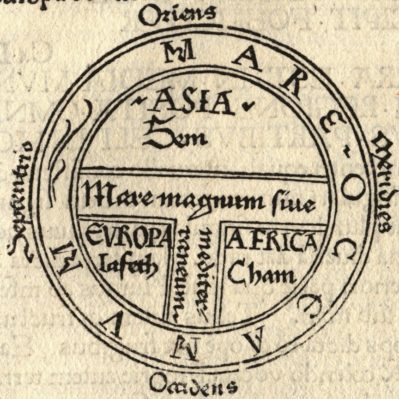 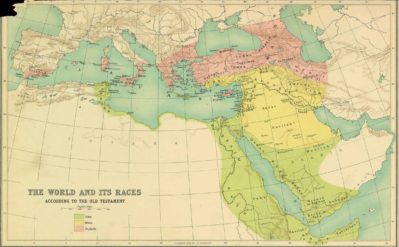