Stage 1/4 In The Life Of A Revolutionary Artwork

On May 15, 1967, the photograph of ‘Huey in a rattan chair’ enters the stage for the first time on page three of the 2nd edition of the Black Panther Paper, Black Community News Service. Huey P. Newton is presented as both the political leader of the Black Panther Party as well as the archetype of a rank-and-file Panther. Through his revolutionary, fearless and militant image, this black urban warrior illustrates and manifests the Ten Point Program that is written down on the same page.

Soon after this first appearance, the photo is distributed through other media, most famously the poster. After Newton is arrested and incarcerated in October 1967 for the killing of police officer John Grey, the poster becomes the centerpiece for the “Free Huey” campaign, which casts him as a political prisoner of a racist and unjust America. With the rise of the Black Panther Party, the image of ‘Huey in a rattan chair’, takes a central position in the visual identity of the Party, frequently used in the Panther Paper, as well as on posters and buttons seen at rallies and on the walls of the many chapters of the Party across the nation.

When police officers shoot up the Oakland Headquarter after Newton’s conviction in September 1968 of voluntary manslaughter, they leave behind the image of Huey in a rattan chair with bullet holes (as photographed by Stephen Shames). This distorted image reveals a new meaning; as the martyr of the revolution.

All this time, while Newton himself was incarcerated, the image of Huey in a rattan chair did the promotional work, even though he disliked it and even before he left prison ordered it discontinued.

With the release of Newton from prison in August 1970, this phase come to an end. Huey is free and is now taking back control of his image. We might even see the photo that was featured on the cover of Jet Magazine in 1972 as an effort to correct or re-appropriate his image. But it was too late… 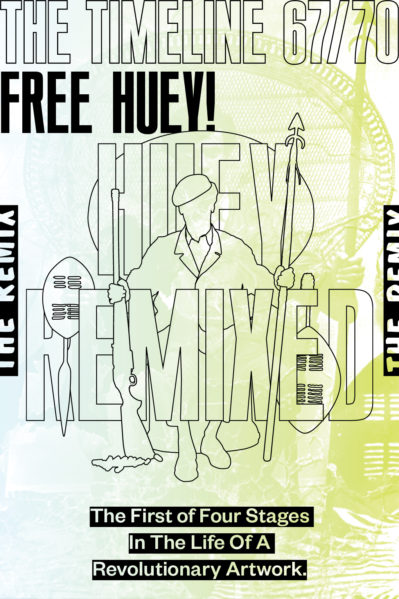