10.29.1966 — “Disseminated nationally by Stokely Carmichael, the Black Panther Party name and logo first appeared in the Oakland Bay Area on this flier for a Black Power conference on October 29, 1966, featuring Carmichael and organized by the Students for a Democratic Society.” (Bloom 2016, 162)

“In early 1967, the Black Panther Party for Self-Defense had only a handful of members. The organization had received no coverage in the press and was known only by those with whom the Party had direct contact, or through word of mouth. By February this began to change.” (Bloom 2016, 48)

02.21.1967 — “In the early afternoon of February 21, eight members of Newton and Seale’s Black Panther Party for Self-Defense, dressed in uniform—waist-length leather jackets, powder blue shirts, and black beret cocked to the right— met up with […] members of the RAM-affiliated group […] to provide an armed escort for [Betty] Shabazz [Malcolm X’s widow] [from] the [San Francisco] Airport to the office of Ramparts magazine for an interview with Eldridge Cleaver.” (Bloom 2016, 49)

04.01.1967 — “In the early morning of April 1, in North Richmond, California, Deputy Sheriff Mel Brunkhorst shot Denzil Dowell, black and unarmed, in the back and head as he ran away. Dowel was left bleeding without medical attention and died lying in the street.” (Bloom, 2016, p. xiii)

04.25.1967 — On April 25, the first issue of “The Black Panther: Black Community News Service” was published. “I [Bobby Seale] founded our Black Panther Party newspaper, and, with “Big Man” Elbert Howard […] and L’il Bobby Hutton, we wrote, laid out, typed, and mimeographed one thousand copies of the Black Panther newspaper’s very first edition.” (Seale in Douglas 2007, foreword)

05.02.1967 — “On May 2, 1967, thirty armed Panthers and their supporters went to the Californian State Capitol in Sacramento to protest the bill [Mumford Act, a California bill that repealed a law allowing public carrying of loaded firearms; “no one can carry a loaded weapon within city limits”]. The Black Panther Party burst upon America’s consciousness when media from all over the world covered this protest” (Shames 2016, 27)

05.1967 — In May, after Sacramento, Eldridge Cleaver joined the party and became the minister of information.

05.15.1967 — “Starting with the second issue of the Black Panther, on May 15, 1967 […], every one of the newspaper’s 537 issues contained the Party’s ten-point platform and program, titled “What We Want Now! What We Believe,” which emphasized the Party’s commitment to advancing a revolution the addressed the needs and interests of the black community.” (Bloom 2016, 70) “The Party’s original Ten Point Program and Newton’s essay “The Functional Definition of Politics,” both published in the second issue of the Black Panther, on May 15, 1967, employed the foundational Marxist concept of “means of production.” (Bloom 2016, 311) “It was Emory [Douglas] who laid out the next [second] issue to be printed on a roll press and on real newsprint.” (Seale in Douglas 2007, foreword)

05.15.1967 — On May 15, the picture of Huey in the wicker-chair together with Ten-Point program was published in the 2nd edition of the “The Black Panther: Black Community News Service”.

08.25.1967 — “On August 25, 1967, FBI director J. Edgar Hoover sent a memo to twentythree FBI field offices around the country instructing agents to initiate counterintelligence activities against black nationalist organizations.” […] “The memo targeted six “black nationalist hate-type” organizations. Most revealing was the inclusion of King’s Southern Christian Leadership Conference on the list.” […] (Bloom 2016, 201) “The Black Panther Party, at the time still a local organization in the Oakland Bay Area, was not mentioned.” (Bloom 2016, 202)

10.28.1967 — On October 28, Newton was arrested for the killing of John Frey, an Oakland Police Department officer.

“There are conflicting accounts of what happened near the corner of Seventh and Cambell Streets in Oakland that morning. In the murder trial that followed the incident, the jury was not able to put together a clear and compelling account from the evidence and testimony presented in the courtroom. But at some point during the early hours of the day, Newton and Gene McKinney arrived at David Hilliard’s house. Newton had a gunshot wound in his abdomen, so David and his brother June Hilliard rushed Newton to the Kaiser Hospital emergency room. Soon the story was all over the news: Officer Frey was dead, and Huey P. Newton, minister of defense for the Black Panther Party, had been arrested as the prime suspect in his murder.” (Bloom 2016, 101)

12.08.1967 — On December 8, after serving four months for the Sacramento event, Bobby Seale was released. 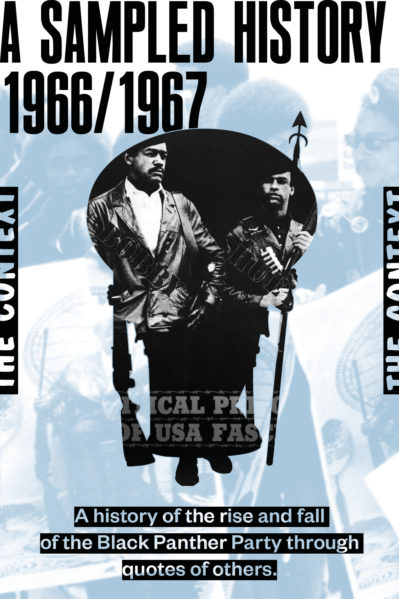