Stage 4/4 In The Life Of A Revolutionary Artwork: 21C-now: The Age of Internet & Social Media

Power to the people! With the rise of internet, mobile devices, and social media, in the first decades of the twenty-first century, everyone who has a camera(phone), a computer and a WIFI-connection can post their remixed versions of ‘Huey in a rattan chair’ on their website, blog, or social media platform of choice. Those who used to consume the remixed version, now produce the derived work and show this to the world. And with some clever use of keywords, tags and hashtags (#hueypnewton, #blackpantherparty, #kathleencleaver), their version of the revolutionary artwork, commemorates and celebrates the Black Panther Party, and keeps the legacy alive.

At first sight, the found footage in this phase, consists of fan-art celebrations of the regal aspect of the image Huey and its message of an unapologetic black identity. We found digital collages, analogue drawings and painting, real-life reenactments, and performative impersonations, in which audiences are channeling Huey’s energy. Taking a seat in the rattan chair, transforms a common person into black royalty and into an advocate for black pride. We also see that the image is used to promote and sell products by politically conscious small black-owned businesses (e.g. the Radical Dreams patch or Johnny Nelson Jewelry).

On second sight, the found footage reveals more about the role ‘Huey in a rattan chair’ plays in this era. The visual components of the original image, are often remixed with pop.cultural references to music (hip-hop), sports and afrofuturism (Egyptian symbolism and cosmic imagery). Some of these remixes favor black pride over the anti-capitalistic message of the original. More interestingly, a majority of the collection in this phase, are images of women in the rattan chair. Either drawing attention to the undervalued role of women in the Black Panther Party or emphasizing the powerful role women play in the formation of black identity, culture and liberation. 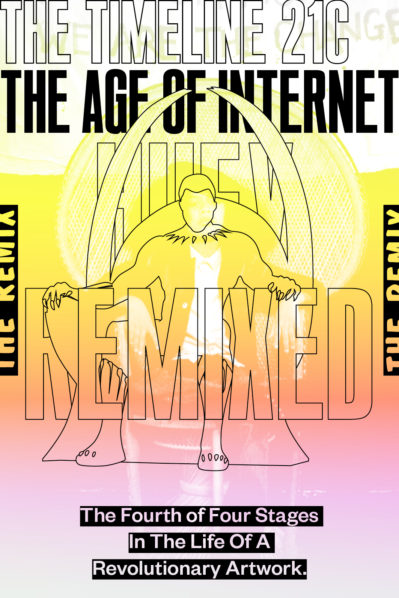