When hip hop rose from a local underground movement to a mainstream global phenomenon in the early 1990s, it brought its cultural-political history, ideology, vocabulary, and visual references to the pop.charts. Huey in a rattan chair was one of those references. More than a music genre, hip hop was and is a cultural movement that originated from the black urban areas; the same areas where the Panthers were ‘policing the police’ and were organizing their community service programs. The militant tone-of-voice, that favored the politics of Malcolm X over Martin Luther King, was in line with the Black American experience hip hop was narrating to its global audience.

At the end the 1980s, Public Enemy became known for their outspoken political message. To emphasize this, they remixed in their stage performance, music videos and coverart the militant imagery from the Black Panthers (e.g. in the fashion and dance routines of the S1W’s). Front man Chuck D is one of the first artists —that we found— to take a seat in the rattan chair for a photo that was published in 1991’s Spin Magazine. Soon other hip-hop artists followed, paying homage to the original ‘Black Urban Warrior’.

With Beyonce’s performance at the Superbowl half time show in 2016, the Black Panther revival reaches its epitome of fame. For this performance, Beyoncé was both praised (as an artist that used her position to address police brutality in the Black community to an All-American audience) as well as criticized (as an artist that is promoting a violent hate group or for being hypocritical for using the Panthers but not embodying anti-capitalism. In her Formation Worldtour 2016, the rattan chair was part of the show, and many black superstars, e.g. Serena Williams, JayZ and Kendrick Lamar took a seat. The introduction to the Panther legacy to a new generation, was affirmed by the box-office success of the Marvel’s Black Panther (2017), which includes references to Oakland and the Party.

Next to popular music, in this era we see the references to ‘Huey in a rattan chair’ pop-up in the art world, especially in activist art and performance/appropriation art. Referencing the image is, on one hand, an act of appreciation or a way to educate the viewer about the overlooked history of black liberation (e.g. Sam Durant’s Proposal for Monument to Huey Newton at Alameda County Courthouse, 2004). On the other hand, the image is used as a template for remixed version. The image and its elements are being appropriated by artist to raise awareness of racism and how it intersects with other discriminatory practices. Think of feminism, liberation and colonial history (e.g. Jeannette Elhers and LaVaughn Belle’s I Am Queen Mary, 2018). In conclusion, the template of the image is so powerful, that it always sends out the message of ‘revolution’, and the way the elements are filled in, makes clear which revolution the author is talking about. 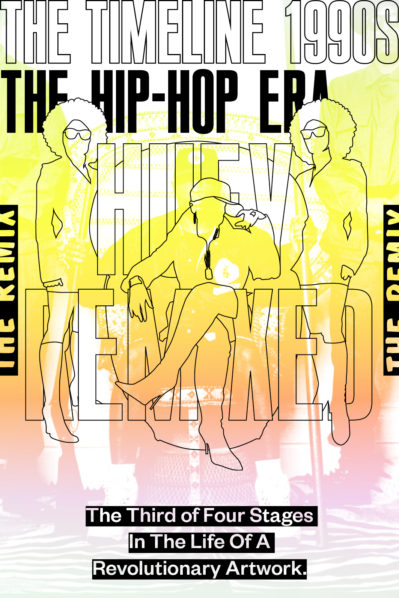