Stage 2/4 In The Life Of A Revolutionary Artwork: 1970s-80s: Pop.Cultural Appropriations

Even though Huey and the Central Committee of the Black Panther Party banned the image from the Party’s official communication strategy, it was in the public domain for the taking. In the 1970s and 80s, the image is appropriated by others than the Black Panther Party. The image moves from the political to the pop.cultural arena. New versions were made by music-and-magazine-cover-artists and photographers. This is the first moment that other artists use the image of Huey in a rattan chair as a template to build derivative work on. We see next to references to the struggle for black liberation (e.g. the cover art for Eddie Kendricks’ People… Hold On, 1971), a cynical caricature of the rattan chair on the cover of Tom Wolff’s essay Radical Chic (1971), that criticizes the role of white celebrities that affiliate themselves with black radical groups.

A new original was conceived through the album cover of Funkadelic’s Uncle Jam Wants You, rescue dance music “from the blahs” (1972). The cover features a photo by Diem Jones of George Clinton in the role of Uncle Jam sitting in a rattan chair, with patent leather boots, holding a ‘bopgun’ in one hand and some sort of metallic-tube-with-globe (resembling a Van de Graaff generator) on the other side with the one-nation-under-a-groove flag in the background. This image is a humorous remix that teletransports the militancy of black liberation to the dancefloor (to rescue it “from the blahs”). On the inner sleeve, graphic artist Pedro Bell, turns Jones’ version upside down and outer space and transforms Uncle Jam into the psychedelic sci-fi cartoon superhero sitting on a skull.

The rattan chair and the 1970s and 80s are undeniably linked to each other. In this age, the rattan chair has become a popular fashion prop, that transforms every person in it into a cool, hip and sexy superstar. From Al Green’s I’m Still in Love With You (1972) to Francis Giacobetti’s photo of Sylvia Kristel as Emmanuelle (1974), the examples are abundant. They are, however, not always a distinctive reference to ‘Huey in a rattan chair’. For that, we need more than the chair alone with a rebel or a person of color in it. 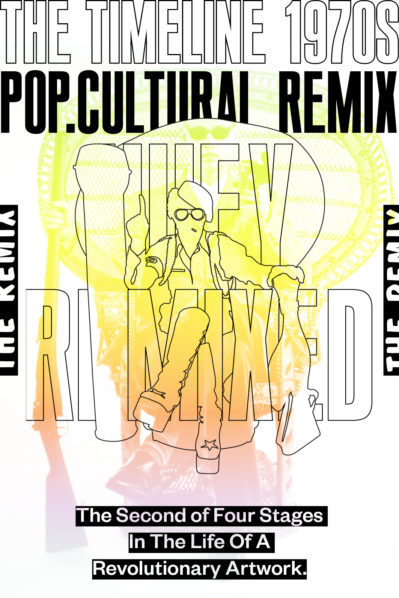