In 2013 in Los Angeles (?) CA (USA), an artwork of Jennifer Moon in a rattan chair holding a microphone and -what looks like- an Asian spear made by the artist, was part of the exhibition ” Made in L.A. 2014″ at The Hammer Museum, LA.

After Jennifer Moon was incarcerated for nine months in 2008 and 2009 for attempted robbery, she transformed her artistic practice. Moon began turning inward, drawing from her experiences in creating the Revolution, a movement that envisions a worldwide shift in thinking through love, presence of mind, and empowerment. Blending political theory, self-help, and fantasy, Moon uses the Revolution in performances, videos, writing, and sculpture to share her unconventional vision with the world.
(Source: https://hammer.ucla.edu/made-in-la-2014/jennifer-moon/)

“It terms of politics, nobody in the show comes close to the scattergun intensity of Jennifer Moon (b.1973). After doing prison time for an attempted robbery (committed, she says, during a drug “downfall”), she started making art in the service of a movement called “Revolution” (no points here for originality), which would change the world through “love, presence of mind, and empowerment” (no points, either, for precision). Understandably, Ms. Moon’s work in the exhibition is morphologically all over the place: photography (including a color remake of that famous image of Huey Newton in the wicker chair, with Ms. Moon sitting in for Mr. Newton); video; memorabilia; free pamphlets; and a complex diagram, with blocks of text in a tiny font, of romantic relationships complicated by politics. Ms. Moon has been granted a surfeit of Hammer floorspace for a remarkably clean, Crate & Barrel-like exegesis of “revolutionary” politics.” (Mr. Plagens, an artist and writer in New York, in the The Wall Street Journal) 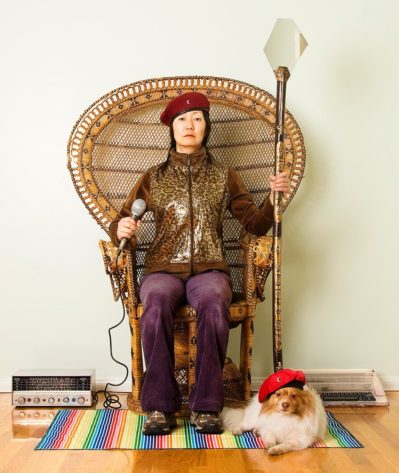