“Her “Michael Brown” work, A Teenager With Promise (2017), comprises two poster-size prints of the infamous New York Times articles that surfaced at the time of Brown’s funeral. The first is a profile of Darren Wilson, the officer who shot and killed the unarmed teenager, the second story about Michael Brown himself, the headline reading “A Teenager Grappling with Problems and Promise.”

Bell’s transformation of these two articles is similar to that of an editor (or graphic designer): She sifts out words, phrases, images, and entire sentences that are either superfluous or loaded with racial prejudice. The end result is a complete revision of the previous piece. Thus, Bell changed the headline to read “A Teenager With Promise” and placed an enlarged photograph of Brown in his high school cap and gown. As for the Darren Wilson text, it was almost completely redacted so that it only reads: “Officer Darren Wilson fatally shot an unarmed black teenager named Michael Brown.”” 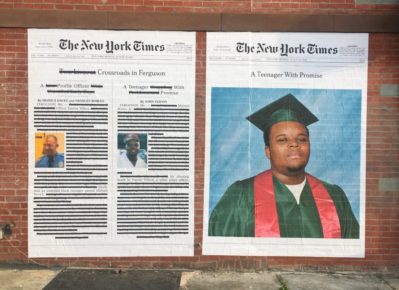