“Grant Wood’s iconic “American Gothic” (1930) has, over the years, been adapted for many purposes–artistic, parodic, comedic, commercial.

In Willie Cole’s rendition of the work, called “American Domestic,” the pitchfork is replaced with an ironing board (of sorts–perhaps symbolizing a slave ship), the female figure is holding a red steam iron and her hair is replaced by cowrie shells, and both figures’ heads are replaced by forbidding African masks–the male’s with rounded hollows for eyes, and  the female’s with thin slits for eyes.

The work, included in Willie Cole: On Site, at Penn’s Arthur Ross Gallery, is striking, but the message is difficult to discern. Cole is known as an African American artist inspired by West African religion, and his work based on steam irons is said to suggest the domestic roles of women of color as well as the Yoruba god of iron and war, Ogun. I think at least it is fair to say that this piece makes a powerful statement about a black reality overlooked in Wood’s classic depiction of the dour and severe middle American.”

“Willie Cole constructs his assemblage sculptures from found everyday objects and imbues them with spiritual power through allusion and metaphor. With an ironic and frequently humorous edge, he consistently fuses elements drawn from his African-American heritage with those of contemporary consumer culture. In the mid-1980s he became preoccupied with the steam iron as a domestic, symbolic, and artistic object and began assembling irons into iconic figural forms reminiscent of tribal art. The idea for the scorch came out of his search for ways to infuse his art with the potency of its African sources.”

“In 1942, Gordon Parks went to work for the Farm Security Administration in Washington, DC. The American capital back then was a cesspool of bigotry. Parks had to enter restaurants and theatres through the back door. Even the federal government participated; the new war office then being built on the other side of the Potomac had separate eating and lavatorial arrangements for blacks and whites.

On his first day, Park took the photo of Ella Watson was a black charwoman who mopped floors in the FSA building. Park recounted how she was paid $1,080 annually (around $15,000 today), how one of the offices she cleaned was that of a white woman who had started work at the same time and with very similar qualifications, how she was raising three grandchildren and an adopted daughter on her meagre salary.

Parks remembered: “She had struggled alone after her mother had died and her father had been killed by a lynch mob. She had gone through high school, married and become pregnant. Her husband was accidentally shot to death two days before their daughter was born. By the time the daughter was eighteen, she (the daughter) had given birth to two illegitimate children, dying two weeks after the second child’s birth. What’s more, the first child had been striken with paralysis a year before its mother died.”

He took the photo to his boss at the FSA (legendary Roy Stryker, who oversaw a stellar team of Dorothea Lange, Walker Evans, Carl Mydans and many more at the FSA). Stryker “told me I’d gotten the right idea but was going to get all the FSA photogs fired, that my image of Ella was ‘an indictment of America.’ I thought the image had been killed but one day there it was, on the front page of The Washington Post.”

Soon, the photo came to be known as American Gothic, after the iconic 1930 painting by Grant Wood. Parks had the painting in mind when he carefully posed Watson in front of a flag-draped office, with mop and broom in hand. It was one of the first photos he took on his way to becoming the Jackie Robinson of photography.”

“This familiar image was exhibited publicly for the first time at the Art Institute of Chicago, winning a three-hundred-dollar prize and instant fame for Grant Wood. The impetus for the painting came while Wood was visiting the small town of Eldon in his native Iowa. There he spotted a little wood farmhouse, with a single oversized window, made in a style called Carpenter Gothic. “I imagined American Gothic people with their faces stretched out long to go with this American Gothic house,” he said. He used his sister and his dentist as models for a farmer and his daughter, dressing them as if they were “tintypes from my old family album.” The highly detailed, polished style and the rigid frontality of the two figures were inspired by Flemish Renaissance art, which Wood studied during his travels to Europe between 1920 and 1926. After returning to settle in Iowa, he became increasingly appreciative of midwestern traditions and culture, which he celebrated in works such as this. American Gothic, often understood as a satirical comment on the midwestern character, quickly became one of America’s most famous paintings and is now firmly entrenched in the nation’s popular culture. Yet Wood intended it to be a positive statement about rural American values, an image of reassurance at a time of great dislocation and disillusionment. The man and woman, in their solid and well-crafted world, with all their strengths and weaknesses, represent survivors. 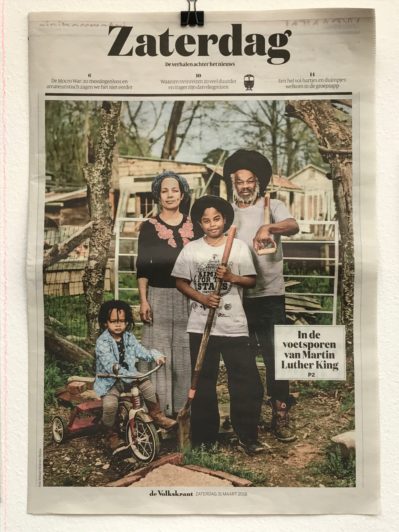 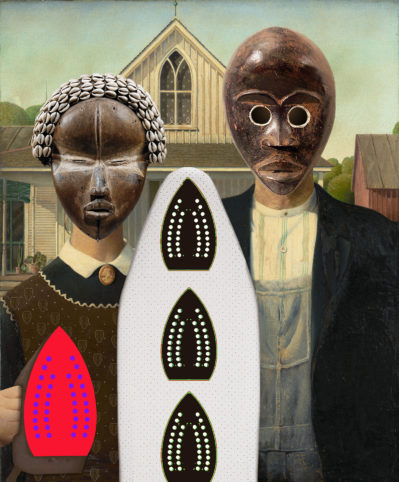 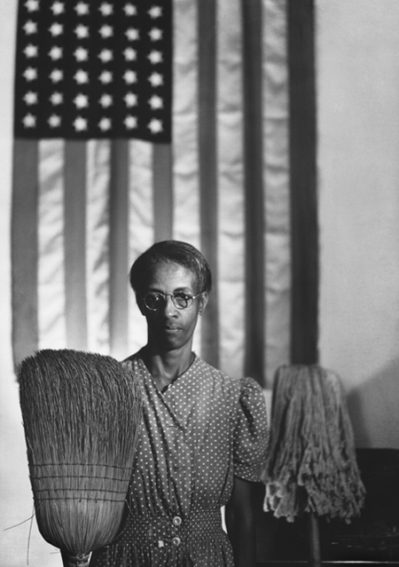 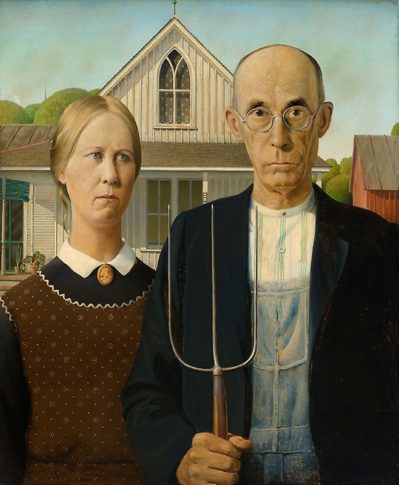